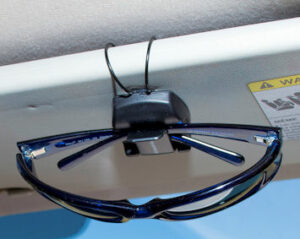 The trusty old sun visor in your car is virtually unchanged since it was first introduced around 100 years ago. Now German company Bosch have taken a quantum leap forward with something called a “Visual Visor”; a 21st century makeover based on artificial intelligence. The new Bosch ‘visor’ automatically detects when sunlight is shining on the driver’s eyes and blocks out the rays using a transparent liquid crystal display (LCD) which only applies to the area immediately around your eyes – very clever. It’s designed to keep your vision clear while you drive without you having to move the car visor around and potentially block your view of the road. It relies on a camera and a proprietary algorithm to deliver the shade over your eyes. At present Bosch are talking to car manufacturers about it but of course there’s no guarantee they will adopt this new ‘visor’ technology anytime soon.
As mentioned in previous news posts, sun glare caused by low sun is a major driving hazard with newly released Dept. for Transport figures showing that, in the UK alone, “dazzling sun” was a factor in 2643  car accidents of which 551 were serous crashes resulting in 27 fatalities. Whilst the trusty old car visor helps with sun glare there is no substitute to having a pair of polarised sunglasses ready to hand in the car. A polarised lens will minimise glare, especially the harsh glare caused when sunlight strikes a wet road.
A really inexpensive and simple way to keep your sunglasses ready to hand is to have a car sun visor clip – available from our accessories section.