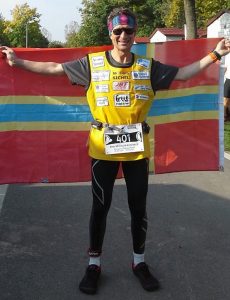 Orkney based William Sichel, one of our sponsored athletes, is about to embark on yet another huge challenge – the Athens International Ultramarathon Festival 1000 Mile road race which starts on Thursday January 16th. William’s main focus will be the current, World Over 65 age-group record of 15 days 2 hours, 50 minutes, 01 second set by Russia’s Vladimir Glazkov in New York in 2004. To break this record William needs to average a daunting 67 miles a day. William is currently pursuing his record-setting project called “Journey to 750” in which he is attempting to set 750 running records at World, British and Scottish level, including age-group records. Currently he has set 732 records, including 104 world age-group records and two Guinness World Records. His shortest record is for 30 miles on the track and his longest is an overall British record for 3100 miles/5000km on the road. William, 65 is a cancer survivor and surely one of the most remarkable British athletes of all time.